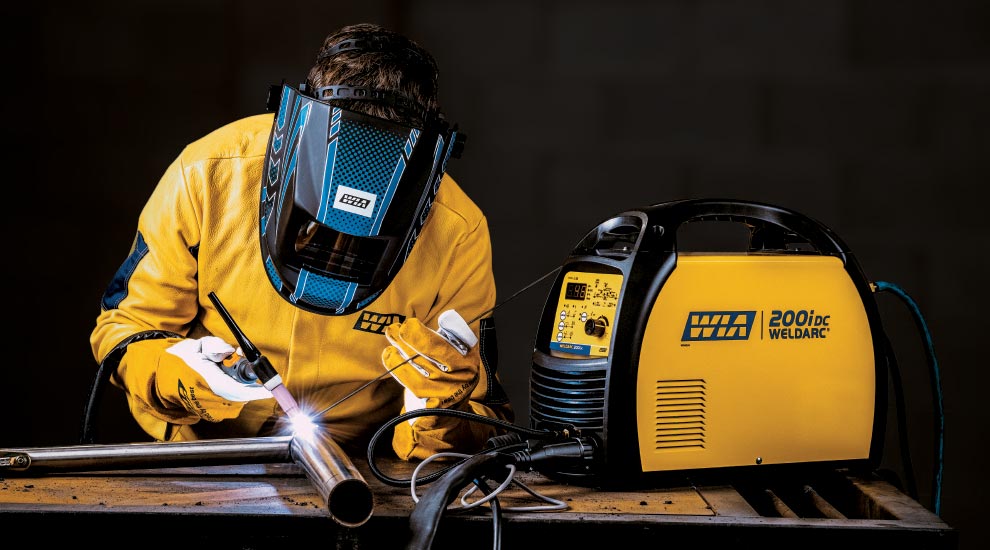 Welding Industries of Australia (WIA) has introduced the new Weldarc 200i DC welding machine, which is designed to meet all of the requirements of professional TIG welders.

The WIA Weldarc machines have been long-established as reliable units that are well-suited to light industrial and construction maintenance work. This is due to the portability of the machines.

WIA’s Equipment Development Engineer Willem Corbett says the new Weldarc 200i DC, while still portable at 21 kilograms, is a much more sophisticated machine compared to the compact DC TIG/Stick models offered by WIA – which include the Weldarc 185i and the Weldarc 145i.

According to Willem, Arc Start for DC TIG on the Weldarc 200i DC can be either with the High Frequency (HF) Pulse non-contact starting method, or the Lift Arc method. “Both options ensure minimum electrical interference during Arc Start, while HF also eliminates the risk of tungsten electrode contamination,” he says.

“The HF Pulse non-contact method is one of the key features of the new Weldarc 200i DC machine. During the arc start process, pre gas flow is provided through an integrated gas valve, the HF Pulse start then ignites the arc without any risk of tungsten contamination. The Lift Arc method also eliminates scratch starting and tungsten electrode damage.”

In the stick welding mode, the Weldarc 200i DC has a built-in “Hot Start” feature, allowing the machine to deliver a peak of current when striking the arc.

It is quite common for welders to build certain modules in the workshop and then carry out outdoor welding for installations on the project site. Willem says the transition from indoor workspace to outdoor work is very easy with the Weldarc 200i DC.

“Being a single phase machine, the Weldarc 200i DC can easily be taken to the site and plugged in to continue welding on site. The built-in Power Factor Correction (PFC) feature also makes the machine tolerant to unconditioned power when generators are used, and tolerant to being operated on long extension leads.”

The Weldarc 200i DC has an IP23S rating, which as Willem explains, means the machine is designed to be tolerant to outdoor environment.

“The IP23S rating means the machine is protected against water sprays and some level of atmospheric humidity. But we do not recommend using the machine for welding in the rain or in very wet environments,” he clarifies.

Safety is another key consideration in the design of the Weldarc 200i DC machine, as Willem explains.

The Weldarc 200i DC comes with an optional built-in Voltage Reduction Device (VRD), which reduces the Open Circuit Voltage (OCV) to a safe level. The VRD operates in accordance with AS1674.2 CAT C requirements.

“The machine also has thermal overload shut down to prevent overheating. The on-demand fan option further reduces ambient noise and prevents dirt and dust from entering the welding machine,” he explains.

The new professional Weldarc 200i DC machine by WIA comes with a three-year unlimited New Zealand-wide warranty, which covers both parts and labour.

“The latest WIA addition to the TIG/Stick welders range incorporates all of the latest technologies and features for professional welders. When you buy any Weldarc machine, you’re buying reliability and performance,” Willem concludes.

Click for more information on the WIA Weldarc 200i DC

How can we help?